A lot happened in March 2018 for the big 4 accounting firms. A few of the biggest news stories are included below. 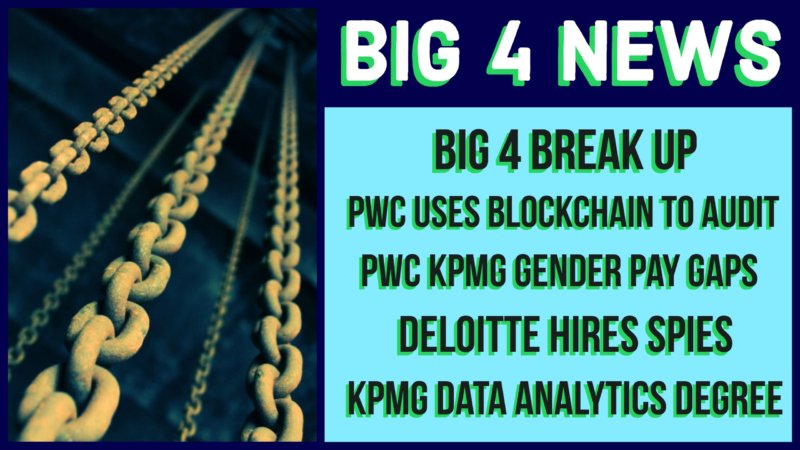 Top UK watchdog looks into breaking up the big 4

There have been a lot of scandals related to the big 4 accounting firms in the past few years which leads many people to say how can this issue be addressed as the big 4 don’t appear to be regulating themselves.

Many of these issues might be popping up due to improvements in technology and information. As technology increases, issues in the accounting of large companies might be spotted sooner.

This comes after a series of scandals that have occurred related to the big 4 over the past couple of years the latest of which is the Carillion scandal. It seems that these large accounting firms should be experts in accounting and business since they are large professional service firms, but it seems that they just care less about learning their clients businesses the bigger they get.

The FRC believes that competition might help the big 4 become more diligent in their work. Since natural competition has not been a problem for the big 4 in more than a decade, the UK is trying to induce some forced competition by potentially breaking the big 4.

In the Carillion scandal, KPMG was the auditor and all the audit firms combined made almost 100 million dollars off carillion in the past year before their downfall.

There is obviously a huge problem when the audit firm can’t catch a problem at one of the Uk’s largest construction companies, but there is no downside into missing an issue because another big 4 benefits form the downfall. KPMG doesn’t care about losing a large audit because they know that one of the big 4 will likely have a scandal at their clients, and then they will be able to pick up an audit off of that.

What makes this worse is mandatory audit rotations. The big 4 just change clients every few years. It’s meant to increase independence and scrutiny, but it does little to increase competition.

Will the big 4 accoutning firms be broken up? Make sure to subscribe to our newsletter to find out.

PwC seen as milking the Carillion administration dry in the UK

PwC has been charging about 2.5 million pounds a week for the administration of the Carillion bankruptcy. They were accused by government regulators of milking the Carillion cow dry because this company was already going under and government agencies were trying to salvage what was left to provide money for pensions, but pwc says they are experts at being liquidators and need to be paid a hefty fee.

PwC was previously accused of being a bad actor as they used to be the accountants for Carillion and their pension funds. They made millions from that work yet they could not spot that the company was in financial trouble. Carillion is a huge scandal in Europe right now. It has many in Europe questioning whether the Big 4 should be broken up.

Foreign Affiliates of the Big 4 Penalized by SEC

Each firm said that they have work to do in trying to even the playing field for women in the workplace. They all tried to describe factors that contribute to this issue, but they admitted that the current gap was not satisfactory.

Deloitte hires spies to head up their Cybersecurity

Deloitte hired a former UK spy to head up their Europe Cyber intelligence practice. His name is Rob Wainwright and he joinged Deloitte from Europol which is a EU intelligence agency similar to the CIA in the United States. Rob has 28 years of experience working in the MI5 in the Uk which is pretty much the same unit where James Bond worked.

This is a huge hire for Delotite. They are obviously seeing the demand from their corporate clients around cyber intelligence as more and more hacks happen. The latest news is this manipulation of datat from facebook accounts. Obviously facebook and other major corporations would like to pretect their private data and avoid huge headline risks from unknown technologies.

Deloitte acquired a firm by the name of API Talent. API talent is considered and advanced AWS consulting partner. This is no surprise as deloitte continues to gobble up amazon web services providers across the globe. They seem to be the only big 4 firm actively acquiring in this space. Although the other big 4 offer these cloud services, Deloitte is the only one that is actively acquiring them.

Maybe it’s because Deloitte is the largest accounting firm in the world which provides them with enough capital to acquire other companies.

We actually suggested that this would happen in one of our previous blockchain articles. We suggested that the big 4 could not only audit via becoming a node, but they can also offer being a node as a services. These private blockchains need multiple nodes to work, but who can these companies trust? Well theoretically you wouldn’t trust anyone more than your trusty CPA right. Well that’s at least what we think many large companies would see with the big 4. It appears to be happening slowly.

How blockchain will transform the tax and accounting industry

PwC will be able to see the data as read only. This blockchain was developed using Linux Foundation hyperledger fabric.

This doesn’t surprise me because private equity firms are the most active in the blockchain space because they have been using blockchains to track ownership. This is pretty risky depending on who else is on Northern Trusts blockchain. We’ve spoken about this on other podcasts. It would be interesting to see who else is on this blockchain.

KPMG expands its masters of accounting with data and analytics program

As we have previously covered, KPMG offered scholarships to students to get a masters in data and analytics with accounting degree. They launched their pilot program at Ohio State and Villanova University. They have since expanded that to 9 universities

KPMG will offer 135 scholarships to qualified students. The focus of the curriculum will focus on technology solutions like data and analytics, robotics, natural language processing, predictive analysis, cognitive capabilities, and workflow automation. All things that we’ve previously covered. KPMG is fully aware that these technologies are the future of accounting so that’s why they are investing in developing these leaders.

This will help EY build out their digital transformation offerings.

EY is opening another wavespace center and this time they are opening it in Charlotte North Carolina. They will add 375 jobs over the next five years. The wavespace centers focus on new technologies in accounting like artificial intelligence and data & analytics.

EY will receive a 3.2 million tax incentive as part of the deal that will be spread over 12 years. E&Y is set to invest 8.2 million over the life of the project.

EY will pay an average of 75,000 per wavespace job. EY has wavespace centers in NY, San Francisco and Seattle.

It is an exciting time in the big 4 as they invest heavily in technology. We’ve seen Deloitte acquire amazon and salesforce consultancies and we’ve seen pwc begin auditing blockchains. EY & KPMG are also investing heavily in tech jobs. EY opening a new innovation center in charlotte north Carolina and KPMG providing scholarships for data & analytics accountants. If you want to work for the big 4, it is extremely apparent that you need to learn about the new technologies that they are using.

It is also important that we don’t skim over the recent scandals and threats to the big 4 accounting firms existence.

It is essential that these scandals are highlighted and prevented in the future. How can they be prevented? I think they can be prevented by new technologies, but I also think big 4 partners and leadership need to be held accountable. I’m not going after the big 4 accounting firms because I am bitter. I am criticizing certain parts of the big 4 accounting firms because they can be great places to work, but the bad apples that work at the big 4 jeopardize their future. If big 4 partners on large accounts are not held more accountable, then regulators will ban the big 4 in certain countries like they have in India or they will break them up and force competition. Unfortunately, the big 4 aren’t really holding their partners accountable right now. All they do is release materials saying they are focusing on audit quality, but it those materials don’t seem to be making their way to leadership at the accounting firms.

It’s not just accountin scandals either. It’s gender pay gaps as can be seen in the latest pay gap releases from PwC and KPMG. Top executives at the big 4 need to be held accountable across the board as it relates to scandals, discrimination and equal pay.

If you want to help our push to keep the big 4 accounting firms accountable, forward this article on to a friend or colleague and start raising awareness on the need for change and need for accountability from top professionals in the big 4. For many of you, your futures will take place at these firms. Make sure that they are great places to work and start raising awareness today. Thanks for reading. Feel free to let us know your thoughts in the comments below.