KPMG is laying people off in Canada.

Check out our COVID 19 Big 4 Tracker where we are tracking the latest layoffs and pay cuts. 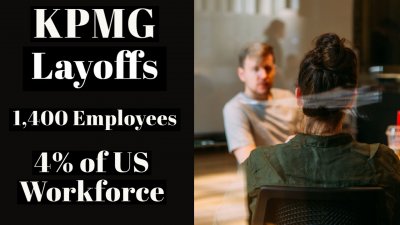 Update as of October 8, 2020 – It has been announced that there was an additional 200 employees laid off from KPMG. This time it is only executive assistants.

KPMG has reportedly laid off 1,400 people in the United States. 779 were laid off in tax, advisory and audit. The remaining employees appear to be laid off from back office roles.

The cuts came from the following departments.

If that wasn’t enough, KPMG also cut the pay of 125 tax employees.

This is about 4% of the US workforce. Previously Deloitte cut 5% of their workforce.

Below is what the firm’s position was in Early 2020:

Lynne Doughtie has announced that they do not plan to lay anyone off in the US yet but that has potential to change. KPMG recently won stimulus work in the United States so that might help the KPMG US firm from having to lay people off.

They are said to be laying people off in Vancouver, Calgary and Toronto. Lay-offs are hitting poor performers first and also lower staff levels. There is a feed on reddit where people are commenting on who got laid off. Some people even said that managers were being laid off. The layoffs seem to be in the hundreds range which doesn’t seem that much, but I don’t think KPMG Canada has that many employees.

KPMG toronto was said to have laid off about 40 employees.

There are terrible stories of people only having a skype call with their partners and then being locked out of their email.

A thing to keep in mind here is that these are still member firms of a larger firm. They can make decisions before firmwide emails go out if they get nervous which seems like partners here did. They are worried about cash flow and their paychecks. People live a certain lifestyle and if that is threatened that won’t wait long to give you the old ax. 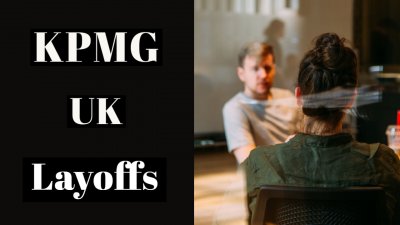 KPMG is reported to be laying off 200 people in the United Kingdom according to bloomberg and sky news.

The rest of the layoffs will hit internal firm service departments like HR and marketing.

Accenture already cut 8% of their workforce in the UK early this month. For those of you that don’t know accenture is an extremely large consulting firm. They grew to be larger than the big 4 accounting firms. Consulting is a great business to be in until a downturn in the economy when businesses spend less on services they don’t need. Consulting services are luxuries that most businesses don’t need right now.

KPMG is also said to be considering cuts to their pension plan. KPMG currently contributes to employee pension plans. They contribute up to 4.5% of a person’s salary. This obviously benefits older employees the most. I doubt they would get rid of this for younger employees, but they probably will for employees over a certain salary.

This also tells us that KPMG is going to likely lay people off in the United States.

Deloitte will shut down in Australia

Deloitte Australia is going to be shutting down for a week in April. They are doing this to avoid cutting jobs. This makes sense since you won’t have to pay for the costs of running such a large business. Additionally, you won’t have to have people run in a circle and worry about their jobs. Deloitte has told employees that they need to be productive while working from home in order to keep their jobs.

Ernst and Young has cut the amount of money that partners can draw from the company.

Grant thornton said that partners will take pay cuts of between 20 percent and 50 percent.

Check out our COVID 19 Big 4 Tracker where we are tracking the latest layoffs and pay cuts.

Big 4 in India have said that they are delaying the yearly appraisal cycle. They will put off promotions, raises and bonuses until further notice. Partners India are also being told to limit their partner draws.

Additionally there is news that the big 4 are still honoring their new employee offers in the U.S., but I’m not sure how long that can last to be honest.

In the UK Grant Thornton has asked their staff to take sabbaticals or huge pay cut. They have been asked to take 40% pay cuts if they do not accept the sabbatical. The pay in grant thornton is not as high as the big 4 firms. For example, in the uk, big 4 partners typically make about 500,000 pounds. While grant thornton partners in the UK only make about 373,000.

In the UK, the big four firms are also withholding profit payments to partners. Deloitte is also said to be offering their employees unpaid sabbaticals in the UK.