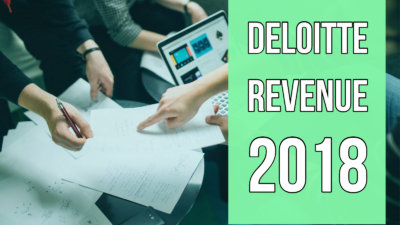 They announced their revenue on September 18 2018.

This is an 11 percent increase in revenues year over year which is pretty significant.

Last year Deloitte was the highest earning big 4 firm, and this year they are also the highest ranking accounting firm.

Deloitte’s CEO Punit Renjen had the following to say about their results.

“FY2018 was exceptional for Deloitte as we continued to deliver a measurable impact for clients, our people, and society. These results reflect Deloitte’s unrelenting commitment to serving clients with quality and distinction while embracing important public-interest responsibilities. Over the past year, we have increased strategic investments in the capabilities and services most sought-after by clients in the fastest-growing markets in the world. We also have expanded our efforts and investments to drive audit quality and innovation while achieving strong financial results.”

Deloitte has also attributed their growth to the fourth industrial revolution.

Deliotte attributes their growth in this area to the growing industry 4.0 – aka the fourth industrial revolution. This represents more than 10 years of double-digit growth for Deloitte’s consulting practice.

Risk Advisory revenue grew the second fastest at 12.0%. This practice grew due to Cyber, Financial and Operational risk consulting growth.

This makes sense since hacking and Russian troll farms has been in the news for a while now. I’m sure many CEO’s are worried about risk to their business coming from cyber risk.

Tax & Legal revenue grew at 8.7 percent for the fiscal year 2018. This is much better growth than the 6.6 percent in 2017. This is most likely due to tax reform and additional global regulation around taxes.

This was primarily driven by the desire for Deloitte’s mergers and acquisitions consulting services. Deloitte says that their was a large appetite for the M&A services this year which is evident through their revenue growth in this practice.

Audit & Assurance revenue grew by 7 percent in 2018 vs just one percent in 2017. Deloitte attributed this to further investment in audit quality.

They said they have invested $1 billion globaly into their audit practice, and I guess it shows in their large increase in revenues in 2018.

They also mentioned one artificial intelligence investment, Deloitte omnia, which helped them grow their practice and increase audit quality.  as it continues to invest in driving quality and consistency across the network and transforming the audit business to deliver smarter and more insightful audits. Deloitte member firms led in overall Fortune Global 500 audit wins in FY2017 and have been recognized globally as leaders in audit innovation, analytics, and artificial intelligence.

In 2018, Deloitte’s Europe Middle East and Africa region grew the fastest at 15.9 percent.

The second fastest growing market was their Asia Pacific region with 13.3 percent growth.

The third fastest growing region was the Americas with an 8 percent growth rate.

The big 4 love to talk about their addition of talent in their revenue reporting press releases as well.

That’s an 8.5% increase in the number of employees from 2017 which is consistent with prior year’s growth percentage.

This 8.5% increase in the number of employees only translated into a 11% increase in revenues, so Deloitte was much more successful in converting those employees into revenues. In 2017, they only had 5% revenue growth rate on 8% employee growth.

This might be due to lower salaries or hiring more valuable employees.

It is also good news for those planning to become future accountants because many people are worried about technology replacing accountants, but it appears that the four big accounting firms are still hiring at historic rates.

In conclusion it was a good year for Deloitte as they finally surpassed  the $40 billion revenue mark.

Additionally, it appears that Deloitte will have over 300,000 employees soon. These big accounting firms are truly trying to be professional service firms and not just accounting firms. Will there be a point where they employ a large portion of the world’s population? Will they penetrate every market where physical employees that offer professional services are needed? It’s just a thought that I have since there appears to be no stopping in their service offerings or the number of employees they hire.