We’ve tracked the largest accounting scandals of 2018 below.

There are different categories of scandals involving the big 4. Some of the general categories are below. 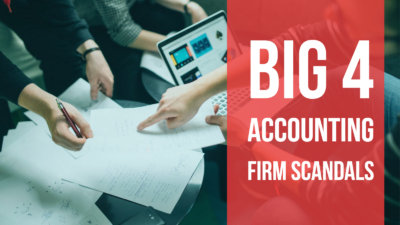 Independence scandals – These type of scandals involve situations where big 4 professionals aren’t independent from their clients.

Ethical scandals – this involves big 4 professionals doing unethical things in the workplace including terrible things like sexual harassment. Other things that fall into this category are things like paying women and diverse people less.

The Carillion scandal for KPMG was one of the largest scandals of 2018 if not the biggest audit scandal.

Carillion was one of the largest construction companies in the UK before they went under. They experienced financial issues in 2017 and went into bankruptcy in early 2018.

kpmg signed off on financial in march of 2016, so how could the firm have gone of the rails by 2017. Work found to be unacceptable according to UK watchdog in June 2018 as a result of their Carillion Audit.

The PCAOB is the regulator of the big 4 accounting firms in the United States. It is important that the PCAOB selection process is random so that the big 4 can’t try to change workpapers ahead of the PCAOB audits. In this case, KPMG was given a heads up as to what audits were going to be selected by the PCAOB.

Former kpmg accountants were charged by the sec in January of 2018 for their role in leaking information to fellow KPMGers after leaving the PCAOB.

the gupta scandal involved government corruption. The gupta family was a family involved in political corruption in south Africa. KPMG was their auditors and was obviously conflicted because the partners on the account were very closely tied with the gupta family. KPMG faced many negative side effects as a result of their association with the scandal. They were investigated by the south African charted accountant organization.

As a result of the Gupta scandal, KPMG lost a lot of clients in South Africa. Barclays Africa was one of these clients. They dropped KPMG as their auditor in May 2018.

VBS Bank audit – vbs bank was placed under curatorship in 2018. KPMG partners turned out to have financial interests in the bank which made it worse for KPMG. Not only did they not spot the fraud, but they turned out to not be independent from the bank. KPMG should have also reported accounting irregularities but they did not.

China medical technologies defrauded investors of over $400 million. Some of these investors were in the U.S.

This was a case where the U.S. wanted to issue penalties against the U.S. listed subs of China medical technologies. KPMG Hong Kong did not comply with orders to provide workpapers. KPMG has said that they do not have the working papers.

KPMG was later freed from the suit by a judge in Massachusetts.

GE investors try to get rid of KPMG as auditor

After a huge write down by GE in 2018 relating to long term care insurance liabilities, investors called for a change of auditors. KPMG has been GE’s auditors for a long time.

Grenfell tower was a large building in London, UK, where a large fire occurred in 2017.  KPMG stepped down from that in january 2018. They stepped down due to a conflice of interest with a contractor that provided flammable material that may have caused the fire. They provided auditing services to Celotex which was the company that provided the potentially flammable material that was used in Grenfell tower.

Steinhoff audit issues were found by Deloitte in Decmeber of 2017. Investigations started in February2018.

Deloitte was fired as the auditor of Steinhoff in 2018.

Fined by the PCAOB for work done by their foreign affiliates. $99k to PCAOB.

Deloitte also got involved in the Carillion bankruptcy. They made over 10 million dollars off of Carillion over the years that Carillion was not performing well from a financial perspective, and they were called out for it.

Deloitte paid $150 million over failed mortgage lender. They failed to uncover errors by Taylor Bean. Deloitte was the auditor from 2002 to 2008. Deloitte settled to avoid litigation.

In the UK, the big 4 accounting firms have to disclose pay gaps between men and women. Deloitte Gender pay gap jumps to 43%. This means that women earn 43% less than men in the UK.

Ey faces sexual harassment complaint in april of 2018. The harassment occurred in a resort in Orlando in 2015. Ey later settled with the female partner who said she was groped.

Pwc banned from auditing in India for 2 years. Relates to their audit of Satyam. Satyam was one of India’s leading software providers. The company’s founder overstated profits by $1 billion in 2009. The securities and exchange board of india was the governing body that placed the ban on pwc india.

Pwc was found to be liable to the FDIC regarding their audit of Colonial bnak. PwC faced the largest ever accounting malpractice verdict of $625 million

In September 2018, additional information came out that said PwC was paid 356 pounds per hour for the Carillion scandal.

PwC also managed the insolvency of Carillion and earned 50 million while doing so which also caused controversy.

Pwc was the auditor of Private bank from 2013-2015. Privatbank was nationalized in 2016 due to financial difficulties. They supposedly had many insider loans that weren’t paid back. Privatbank had a capital shortfall of $5.5 billion.

PwC was the auditor of BHS.

BHS was a collapsed department store, and the PwC partner on the account faced a 15 year ban. The UK FRC launched an investigation in 2016. PwC was fined 6.5 million pounds as a result of the company’s collapse. They faced a 10 million pound fine, but the fine was reduced after PwC agreed to settle.

Type of Scandal – Conflict of Interest

Grant Thornton was also wrapped up in wrongdoing as far as accounting scandals go. They aren’t a big 4 accounting firm but they had to pay the largest fine by a non big 4 firm this year. They had to pay 4 million pounds in the UK in fines. They were fined by the FRC due to conflicts of interest at their audits of Nichols PLC and Univeristy of Stanford.