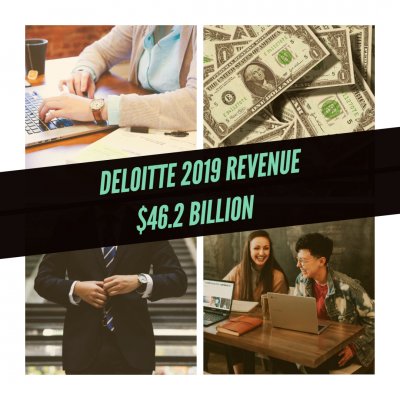 Deloitte made $46.2 billion dollars for their 2019 fiscal year ended May 31 2019. Seems like only a year ago that I was wondering which big 4 would hit 40 billion in revenue, and now Deloitte is about to surpass 50 billion. Truly Amazing!!!

They announced their revenue on September 10 2019.

This is an 9.4 percent increase in revenues year over year which is pretty significant. That is measured in local currency.

Last year Deloitte was the highest earning big 4 firm, and this year they are also the highest ranking accounting firm.

Deloitte’s CEO Punit Renjen had the following to say about their results.

“At the core of Deloitte’s culture and business model is the fundamental belief that we exist to make a positive impact for clients, our people, and the communities in which we live and work. Our performance in FY2019 is evidence that a purpose-led approach works. Disruption and transformation are shaping business and society today, imposing new and urgent responsibilities on business leaders. Deloitte is meeting the challenges by building an equitable and sustainable business for the long term and holding itself accountable for the triple-bottom line of people, profit, and planet.”

Deloitte has also attributed their growth to the fourth industrial revolution.

Deliotte attributes their growth in this area to the growing industry 4.0 – aka the fourth industrial revolution.

The largest region for their consulting growth was Asia which most likely means China. The trade war might impact this in future years.

This is Deloitte’s cybersecurity practice. Deloitte was ranked number 1 by Gartner for cyber consulting services.

Tax & Legal revenue grew at 8.5 percent for the fiscal year 2019. They grew by 8.7% in 2018. There is some slowdown here as well. It is hard for Deloitte to have crazy growth every year as their revenues keep increase.

This is most likely due to tax reform and additional global regulation around taxes.

This was primarily driven by the desire for Deloitte’s mergers and acquisitions consulting services. Deloitte says that their was a large appetite for the M&A services this year which is evident through their revenue growth in this practice.

Audit & Assurance revenue grew by 3 percent in 2018 vs 7% in 2017. Deloitte attributed this to further investment in audit quality.

They said they have invested $1 billion globally into their audit practice. They are also winning multiple awards for audit innovation tools. Unfortunately, audit practices across the big 4 are slowing down. I would not look for a career in audit unless you really love auditing. Revenues growth is decreasing across the board.

They also mentioned one artificial intelligence investment, Deloitte omnia, which helped them grow their practice and increase audit quality  as it continues to invest in driving quality and consistency across the network and transforming the audit business to deliver smarter and more insightful audits.

They also mentioned other tools such as Cortex. Make sure to keep up to date on all of Deloitte’s innovations to prep for your interview.

The second fastest growing market was their Americas region with 10.4 percent growth.

The big 4 love to talk about their addition of talent in their revenue reporting press releases as well.

This represents an addition of 25,800 in 2019. In 2018 Deloitte hired 22,000 employees, so they hired a lot more even though they are investing in technology. This is truly insane. The big 4 are obviously dominating professional services if they are willing to hold over 300,000 employees. It will be interesting to see how long this investment in jobs continues.

That’s an 9% increase in the number of employees from 2018 which is consistent with prior year’s growth percentage.

It is also good news for those planning to become future accountants because many people are worried about technology replacing accountants, but it appears that the four big accounting firms are still hiring at historic rates.

In conclusion it was a good year for Deloitte as they are getting close to the $50 billion revenue mark.

Additionally, these big accounting firms are truly trying to be professional service firms and not just accounting firms with the number of employees they have. Will there be a point where they employ a large portion of the world’s population? Will they penetrate every market that needs physical employees? It’s just a thought that I have since there appears to be no stopping in their service offerings or the number of employees they hire.

The way to view the big 4 is a pool of employees that can do work whenever necessary. Do you have a restatement, merger, or other issue that requires people with a college degree? Do you need those services backed by a huge insurance policy in case something goes wrong? Don’t look anywhere else other than the big 4. You could go to a consulting firm or a big bank, but they don’t have anywhere near the number of people as the big 4.