Dummies Guide To EY Entrepreneur of The Year Award

What is the E&Y entrepreneur of the year award and why does it matter?

It is a contest held by EY each year. You might have seen EY tweet about it frequently. 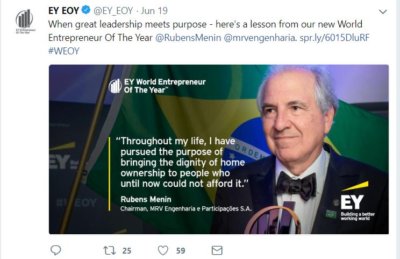 This is an important contest because EY blasts it all over their social media all year long as they select these winners and they just had their world entrepreneur of the year contest in Monaco.

First up let’s talk about who won the competition.

Who Won EY’s Entrepreneur of The Year Award in 2018

Ey recently awarded their world entrepreneur of the year award to Reubens menin who is the founder of MRV engenharia which is a leading low income house builder in brazil.

This organization is now Brazli’s leading residential real estate developer. 1 in 200 brazilian residents lives in an MRV home. Reubens menin is the founder and entrepreneur of the year.

So now that we know who the winner is of the program let’s go through some interesting facts about the competition.

When was the ey entrepreneur of the year award started

It started in 1986 in Milwaukee and was just one award

Where does the contest take place?

The contest is held in 50 countries and 145 cities.  However there is only one winner in the world contest held in Monaco. All country winners are eligible to win the overall world entrepreneur of the year award.

How are the winners selected?

Each member of the EY World Entrepreneur Of The Year independent judging panel receives a detailed packet of information on each of the country winners in advance of the judging session. After a private meeting of the winners and judges while in Monaco, the panel convenes to discuss each candidate’s qualifications and to select the EY World Entrepreneur Of The Year. The winner is then announced at a black-tie award ceremony on Saturday evening.

The award is given on the basis of a balanced score card of six criteria, allowing all national winners an equal opportunity to compete:

Why did EY start the EOY program?

EY started the program to recognize the world’s most successful and innovative entrepreneurs. By identifying and recognizing the contributions and achievements of outstanding entrepreneurs within successful growing, dynamic businesses, they aim to encourage entrepreneurial activity around the world.

EY says that work with great entrepreneurs at every level of society: fresh thinkers at global corporations, visionaries at pre-IPO firms and social entrepreneurs working on society’s most pressing problems. We have learned a great deal from these interactions and recognize that entrepreneurialism isn’t about size; it’s about a state of mind. E&Y believes it’s something that all businesses can — and should — embrace.

What Other Benefits Does EY Enjoy As A Result of This Competition?

Entrepreneurs are typically people that are at the beginning stages of starting their companies. Oftentimes these people don’t like accounting and don’t know who the big 4 are. The reason ey is getting involved at this stage is to build their brand with the large corporations of the future. When one of these businesses get really big and IPO, they’ll remember EY or at least that’s what EY is hoping and use them as accountants.

They will hopefully use ey as their auditors or their consultants.

Additionally, it’s important for you to know this if you are interviewing with EY or if you work for EY. Also if you work at another big 4 this is a good idea. Getting involved with businesses early on in their life cycle is a good way to develop business.

If you are interviewing with EY, feel free to bring this up with the people that you interview with and ask them about the importance of the event to the firm.