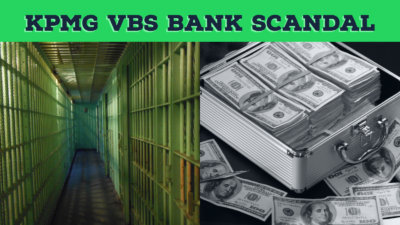 VBS mutual bank has gone into curatorship in South Africa. It is suspected that there was fraudulent reporting and transactions as part of this scandal. VBS bank could not account for one billion rand. VBS bank was also thought to be involved in the recent Gupta scandal in South Africa that has tarnished KPMG’s reputation.

The federal reserve bank of south Africa has launched a full investigation into how VBS bank went into curatorship.

The problem here is that VBS bank is a client of KPMG and this is yet another scandal that KPMG has to deal with in South Africa. KPMG signed off on the financials of VBS bank for the past several years without raising any concerns.

KPMG has already lost tons of clients in South Africa and now there is another huge scandal.

There are many officials calling for KPMG to be banned from auditing in South Africa.

As a result of all this KPMG suspended the lead partner on the engagement and they subsequently resigned. The partners are thought to have resigned because they had personal financial interests in VBS bank that were not disclosed.

One of the partners was the lead of KPMG South Africa’s largest business unit which was their financial services branch.

KPMG is going to launch an independent review of all the work performed in south Africa for the past 18 months. That is huge news. To review the audit work of a whole region for 18 months is a significant investment of time.

So those are the facts and that is the background of this case.

How KPMG South Africa have another scandal?

To me this is crazy that KPMG can have yet another huge scandal in South Africa after the Gupta Scandal. KPMG lost so many clients after that scandal that you would have thought they’d look into their files after that.

I think this latest scandal happened because a lack of leadership. It seems that KPMG South Africa operated independently of the global firm and did not have the same values and ethics of the global firm. How could you possibly have one of your most important senior partners in South Africa have an independence issue. How could he possibly have a financial interest in an audit client when he is basically the lead auditor of KPMG South Africa. That shows me that he had no fears. He had no fear of being caught, and he most likely would not have been caught if VBS bank never went under.

Is this investigation too little too late for KPMG South Africa?

I think KPMG is making good moves now by pulling all their audit files off the shelf and giving them a second look. The problem is I think it will be too little too late. I think the damage is done, and I think KPMG might have to look at closing this office down. They’ve already lost a lot of big clients in the region which means they’ve lost a lot of revenue. Now they are going to being spending a lot of money to investigate their work. If that investigation shows that there were other scandals or other independence violations, it might be KPMG going into curatorship in South Africa.

What does this mean for you

Again, similar to what we said last week when we spoke about the PwC Scandals. You should be bringing up your integrity when you speak to big 4 professionals in your recruiting process. You can also mention how you have attention to detail. The big 4 are going to want candidates who have high integrity, ethics and attention to detail after all these scandals. They aren’t going to want people that just clock in and clock out and go with the flow.

If you already work at the big 4, you need to be more diligent during your audit planning process to make sure that your team can catch issues like this. Additionally, you should also be prepared for additional training. The big 4 will no doubt have more mandatory training around ethics and integrity.

Global audits at the big 4 will also likely receive more scrutiny. For example, if you work in the U.S. or the U.K. and you rely on South Africa or other big 4 member offices, that work will receive more scrutiny when it gets quality reviewed internally and externally by the PCAOB or the FRC.