49% of new joiners were female 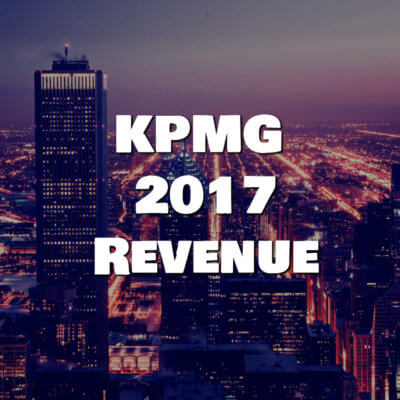 Now let’s get into the details.

KPMG announced revenues of $26.4 billion for their fiscal year ended 2017. This compares to KPMG revenues of $25.42 billion in 2016. That’s an increase in actual US dollars of 1 billion. In actual dollar growth that’s only 3.9 % of growth. If you remember when we tried projecting KPMG and PwC revenue, we said that KPMG would reach revenues of about $26.9 billion. Unfortunately, we were off by about $500 million because of KPMG’s tough year. Even though we nailed the PwC revenue of $37.7 billion.

We are going to have to dive into these numbers a little bit deeper to understand why they are so bad.

You first have to look at their regions to see where they are struggling. They made $10.48 billion in the Americas region and you have to assume that the majority of this is coming out of the U.S. In that region they only grew revenue by 4.6% which is pretty bad.

The next region that you have to take a look at is their Asia pacific region which grew by 8.9% from $4.06 to $4.42 billion in 2017. That obviously isn’t the reason their growth was bad as it is almost double what their average growth was for the year.

Lastly, Europe Middle East and Africa region grow by only 1.4% from $11.34 billion to $11.5 billion. The majority of their revenue comes from this region and you can see that it is struggling. There could be many reasons for this, but one of the biggest ones could be the KPMG south Africa scandal where they lost tons of clients because they were involved in a government fraud scheme.

It seems that KPMG is struggling to grow their Americas and EMA regions. Let’s take a look at other reasons why their revenue might be slowing down.

Let’s look at their practices to understand how they grew in 2017. If you look at KPMG’s audit practice you can see that they grew at 2.7% from 10.12 billion to 10.39 billion in 2017. That’s pretty slow growth for an audit practice and just goes to show that audit is slowing down in growth for all the firms. The only thing that can keep their practices growing is growth in more companies going public.

With terrible growth out of KPMG’s audit practice and only modest growth from their advisory and tax practices, you can begin to see why KPMG had such a bad year.

Next we’ll take a look at KPMG’s revenue by industry.

Another important part of every big four accounting firms financial releases is the detail they release about their employees. This is because the big 4 make their money off of billing out their employees’ time. It’s important to understand how their people are growing in relation to their revenues.

KPMG’s number of employees grew to 197,263 from 188,982 in 2017. That represents growth of 4.4%. This explains a lot in terms of KPMG’s 2017 revenue numbers. No wonder they didn’t have a lot of revenue growth. Their people growth was slow as well. You can’t make more in a business reliant on billing out for people’s time if you don’t hire more people every year.

Another important stat for KPMG is that of their new hire class 49% were women. They have been deploying this stat all over social media.

They also highlighted their investment in KPMG Clara which we’ve spoken about previously on our site and in our podcast.

It was a bad year for KPMG. As the smallest big 4 firm they can’t afford not to have significant growth. It should be easier to have growth on a small number than it is on a big number, but that doesn’t seem to be the case with KPMG. They seem to be lagging far behind the other big 4 now with no sign of being able to catch up. They are going to need to make some significant acquisitions in order to come close to the other 3 accounting firms.