Covid 19 has changed the way the world works. It has reduced the demand for goods and services. The big four are typically don’t suffer that bad in economic downturns since most of their work is government regulated. However, COVID-19 has slowed every type of business down. 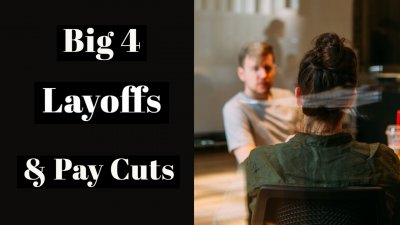 Have a tip? Email us at info@thebig4accountingfirms.com

So far the big 4 have responded by

I think eventually the big 4 will try to get out of certain commercial leases and have more employees work remotely or from client sites. They will try to reduce overhead as much as possible.

See what each firm is doing below:

First confirmed big 4 to lay off employees. They laid off employees in April 2020 in Canada. Employees were fired on short notice.

KPMG has reportedly laid off 1,400 people in the United States. 779 were laid off in tax, advisory and audit. The remaining employees appear to be laid off from back office roles.

The cuts came from the following departments.

If that wasn’t enough, KPMG also cut the pay of 125 tax employees.

This is about 4% of the US workforce. Previously Deloitte cut 5% of their workforce.

As of early April, KPMG US has said that they will not lay people off. Partners are taking pay cuts to prevent this from happening. As of June 2020, there are reported to be some layoffs occurring in KPMG US.  Previously, Lynne Doughtie said there would be no layoffs, but she is going to be stepping down soon. Since she will no longer work for KPMG, she doesn’t necessarily have to keep her word.

An additional 200 employees at KPMG US were laid off. This time it was only executive assistants.

KPMG is said to be reducing hiring in India.

Employees in the UK must take a 20% pay cut if they make over $62,000. Supposedly this pay cut will only last 4 months. Employees can opt out of the pay reduction, but not opting out means that it will happen automatically.

Australia also announced pay cuts of 20%. The pay cuts were voluntary but 99% of the staff accepted the pay cut.

Partners in the UK will have to take a pay cut between 30 and 50% percent. This is because of a reduction in their partner draws.

KPMG US has won stimulus work. This is great news because it makes it less likely that KPMG will lay people off in the U.S. This is most likely worth millions or tens of millions of dollars of work to KPMG U.S.

Worried about your future? Take our big 4 career planning course for COVID-19.

Closed down offices in the middle of March and told employees to work from home.

PwC is going to cut underutilized staff’s pay by about 40% in Australia. Partners pay will also be reduced.

Promotions and raises at PwC Uk’s legal practice are on hold. PwC has recently announced that they will be cutting pay in the UK by 20%.

Global careers twitter page has not been updated recently.

PwC Uk Careers twitter page says they are working with individuals based on their individual circumstances. I’m sure this means they are trying to lower the pay.

We welcomed over 180 new graduate joiners on Monday to begin their@PwC_UK graduate training programmes. Using the power of technology and remote working, our recruiters and L&D experts successfully onboarded them virtually to enable the start of their career with us. #PwCproud

People on reddit say they are still receiving full time offers as of right now including internships. Start dates might be extended.

Closed down offices on March 17th and told people to work from home.

EY is saying that there won’t be any bonuses this year but that they will be doing possible raises and promotions.

EY cut pay 20% in Australia. They are also supposedly cutting down working hours in Australia as well. The paycuts will happen from May to July.

EY is debating whether to lay people off in Australia.

Reducing hiring in India. Planned to hire 23,000 employees in 2020 in India. That will no longer be the case.

EY Careers twitter page has not been updated recently

Told employees to work from home starting on March 17th.

Shutting down operations on April 20, 2020 in Australia.

Deloitte U.S. has announced that they will cut about 5% of their workforce. This amounts to about 5,000 employees in the United States being laid off. A majority of the cuts will be from Deloitte’s consulting division. Deloitte consulting revenue is projected to be down 15-20% this year.

Deloitte Canada has laid off about 230 employees in Canada.

Deloitte is cutting pay in the UK by 20%.

Deloitte is cutting pay in Australia by 20%.

Recommending employees to take a sabbatical.

Deloitte announced in May 2020 that they will be canceling Summer 2020 internships in the UK.

Asking staff and partners to take a 40% paycut in the UK or go on sabbatical.

Other branches of Grant Thornton have announced 25% reductions on partner draws for the rest of the year.

Grant Thornton is not providing raises or bonuses in 2020 to people unless they were promoted.

BDO has announced that they will be cutting pay for everyone earning over $60,000. The cuts will range from 5-10%.

They will be reducing pay by 10% starting May 1.

Prager Metis is a Top 50 accounting firm in the U.S.