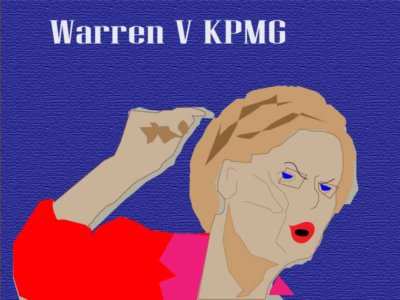 This is most likely because Wells Fargo easily ratified KPMG as their independent auditor as part of their annual proxy process in 2017. Elizabeth Warren was hoping that Wells Fargo would fire KPMG similar to what they did to their CEO. Now that they have not fired KPMG she is out for her pound of flesh.

The reason that Warren and others have questioned this is because Wells Fargo committed tons of fraud for years by setting up fake accounts for their clients.

What resulted is that the Consumer Financial Protection Bureau fined Wells Fargo $100 million for creating 1.5 million deposit accounts and over 500,000 credit card accounts. These accounts were not authorized by the customers.

I’m not too sure how KPMG reached that conclusion because $100 million is a pretty significant financial impact to me. Additionally, there is no way that KPMG could have known that the amount would have only been $100 million.

KPMG has handled this whole thing poorly. There is no doubt that they should have done more when they figured this out. They should have also resigned just for branding purposes. This account is too high risk if you have executives involved in a scheme to defraud customers. How can you say that the controls over the financial statements are still there.

Lynne Doughtie who is the KPMG US is the one who repsonded to Elizabeth Warren on behalf of KPMG. I don’t blame Lynne for the way she responded because she is just in an accountant’s mindframe. Sometimes these big 4 accountants just get tunnel vision and only see the checklists and the templates for their audit programs. If you come away from everything that Wells Fargo did during this timeframe thinking that you are all good from a controls perspective, you are just living in another world.

This is exactly what Sarbanes Oxley was meant to prevent. It was meant to prevent misconduct by executives and prevent their big 4 auditors from just sitting on the sidelines. It is obvious to see that there is still a conflict of interest here. It is obvious that KPMG doesn’t want to lose the account because it is one of their biggest clients of the firm. It would be a material impact to their financial statements to lose Wells Fargo as a client.