How Deloitte’s CEO Cathy Engelbert Rose To The Top

In early April 2018, Deloitte’s US CEO was featured in a forbes article. The title of it was how her rise to the top was not linear. As you might know Cathy Engelbert is the CEO of Deloitte US.

This article highlights the struggles that Cathy has faced throughout her career and the current causes she’s championing.

It covers the adversity she’s faced, and how she overcame that adversity. Not only did she face adversity though, she also looked out for others on her rise to the top. 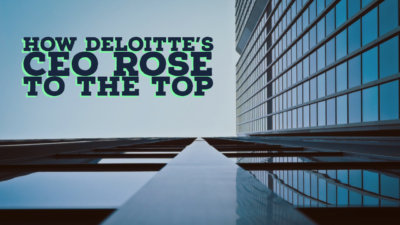 How Deloitte CEO Cathy Engelbert Rose To The Top

What are some of the adversities that Cathy faced?

Resigned from Deloitte in 1997 5 months pregnant – didn’t have confidence. She thought there was no way she could be a great professional and a mom.

The client she was on offered her a position in the treasury group. Then partners took her out and told her that she had all the potential in the world. At that moment she had a eureka moment in noticing that men have to be part of the conversation in women’s success in corporate America.

I want to take a quick break here. In my view, your success in the big 4 and in any corporate career for that sake is when your boss has interest in your career. When they look out for you. If you are boss only looks out for themselves and only occasionally checks in on you, you will feel very alone.

Another adversity that she faced was when her father passed away in 1987 leaving her the eldest sibling at home to help her mom through the loss. She said it was the range of opportunities at Deloitte that kept her with the firm.

It seems that those opportunities led her down a rough path at Deloitte though. She said she’s had 5 different careers within the firm. This likely refers to her working in multiple industries. She’s been in

In 2015, she was elected CEO of Deloitte US and since then she was elected as the chair of Catalyst which is a nonprofit that helps women succeed in the workplace. She’s received hundreds of fan mail thanking her for being an inspiration.

Since then she’s been championing women’s causes in the workplace, and she’s also been telling Deloitte employees how to manage their careers.

She tells folks within Deloitte that they have to actively be managing their careers. That they have to go find the mentors and sponsors. If you don’t look for them, you are going to end up leaving.

She also proposed the current 16 week paid leave program that Deloitte US currently has which the article says was a big proposal for her. I am not sure if I buy that because Deloitte came out with that program after the other big 4 already had similar policies in place. I think that was a reactionary move, but I do think it was good of her to see what the other big 4 were doing to recruit talent and pivot towards doing the right thing.

In conclusion, I think this article highlights how the path to the top ranks of the big 4 are not easy. To become partner is hard. You have to navigate tricky political situations and come out ahead. You also have to avoid burnout. It sounds like Cathy got burned out multiple times over her career, but she always had friends and mentors there to support her and pick her back up. She didn’t get there by sitting back though. She had to fight for her success and now that she’s at the top she is trying to motivate other employees as well.

My takeaway for all of you big 4 accountants is to understand that moving up the big 4 ranks is not easy. It might be easy to make senior associate or manager, but making partner isn’t necessarily easy. Moving up into senior leadership is even harder. Cathy makes it apparent that if you don’t have someone supporting that you will likely leave. That was a shocker for me to hear a big 4 CEO admit that. She admits that you will likely burn out if you don’t have a mentor. I encourage all of you current and future big 4 accountants to get a mentor. Obviously, our website and our podcast is a great start, but you also need someone that can look out for you come performance review season. You need someone that is personally invested in your well being and your career.