Deloitte university was just a thought back in 2006 when the CEO of Deloitte was just thinking of the idea. Who knew that it would be shaping the future of Deloitte. Many partners were opposed to having such a large fixed cost because they wanted the ability to cut costs in the time of a recession. 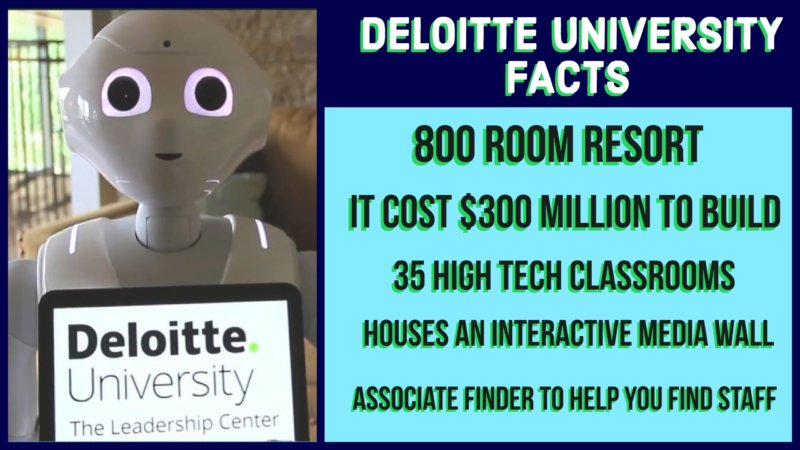 Deloitte decided to build Deloitte university because they found that 70% of learning occurs informally. This is what Deloitte University is built around. It is built around informal learning. There are classrooms, but Deloitte wants their people to learn by interacting with each other in the social areas all around the campus.

As stated above there are several courses for clients to take at the center. There is a CFO academy for people being groomed to be CFO’s . There is even a CIO academy now.

The market is the main dining area in the Deloitte University located in Dallas. They feature buffet style food. They serve 3 meals a day. There are no two seater tables.

375 bistro offers coffee and snacks. All the tables are meant to get people to socialize together.

There are no pay per views in the room.

After 5:30 people are encouraged to head over to the Barn. The barn is the sports bar type of area for all the Deloitte folks to mingle. This is where all the happy hours take place.

The Deloitte university facility in Westlake Texas also houses a 12,000 square foot gym. There is personal training at the gym. There are also athletic fields and a two mile trail for running and walking.

The architect of the building was Gensler. The builder was Turner Construction.

Many people acknowledge that the development of Deloitte University has boosted recruiting efforts.

Should you join Deloitte just because they have an awesome facility like Deloitte University? No, you shouldn’t but it definitely is a plus in the benefit column. There have been studies that facilities like these boost morale and recruiting in the short term, but the long term effects don’t last because people just end up doing work in the hallways and lobbies of these facilities. They don’t see the value in going to huge hotels to get their learn on.

Let us know your thoughts on Deloitte University in the comments.