5 Lessons Learned From the Ernst and Young AIG Tax Deal

EY formed a partnership with AIG on February 5, 2018. They’ve termed it a new innovative global tax compliance and technology operating agreement. It involves a combination of managed tax services and there will also be some AIG employees that move over to Ernst and Young. The partnership will last for 5 years. 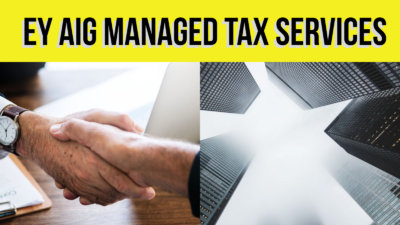 The employees moving over to Ernst and young will focus on the compliance obligations of AIG while the people left at AIG will focus on more strategic initiatives.

So behind all the fancy words and press releases what does this mean. This means that AIG is outsourcing their tax department to Ernst and Young for 5 years. If they like the terms of the deal and the work they receive, then they will most likely make the deal permanent or extend it. You have to remember that Ernst and Young and the employees from AIG that are moving to Ernst and Young will be performing tax compliance services for AIG. What Ernst and Young plans to do is utilize the knowledge they gain from working inside of AIG to win more work at other clients.

PwC probably would have been doing this for AIG if they weren’t restricted by independence measures since PwC is their auditor.

1. Managed Tax Services Are The Way Of The Future

The big takeaway here though is that large fortune 500 companies are willing to outsource large back office functions to the big 4 accounting firms.

I don’t think this will just stop at tax departments or accounting departments.

The big 4 will be willing to manage any professional services for large companies like marketing, advertising, consulting, mergers and acquisitions, legal departments, tax departments and accounting departments.

Ask about managed tax services during recruiting or at networking events.

Ask about managed services in general when interacting with big 4 professionals.

Whether you are recruiting or you currently work for the big 4, bringing up managed tax services will make you seem like you are in the know. This is on the mind of CFO’s and big 4 partner’s minds.

You can build rapport and establish your brand by bringing this up in recruiting or in networking events.

What’s really astonishing is that all of this is happening with tax reform. Tax reform was just passed at the end of 2017 yet these deals are still going through. Companies are so willing to cut costs that they are doing it through a very tough time in tax law.  There is a huge transition that will come along with the new tax laws in the U.S. These are U.S. companies that are doing these managed tax service deals.

They are willing to go through a huge change in tax law while also simultaneously outsourcing their tax functions and dealing with all the headaches that come with that.

That tells me that these companies are prioritizing long term cost cutting over short term headaches. I don’t think tax departments are the most bloated departments either.

I just think that was the first department to be targeted by the big four because individuals inside of PwC had close ties with tax people at GE. That got the pattern moving on outsourcing whole veteran departments to be replaced by younger talent at the big 4. However other bloated departments within large organizations will likely get targeted next.

4. Technology is going to change the nature of the workforce

I think another reason these deals are happening is because of technology.

I think everyone knows the deal about the accounting industry for the large part.

FIrst, you go to the big 4 to crank out a bunch of work over a number of years and get your experience. Then you use that experience to get a good job in industry and chill out.

I think the baby boomers and gen x took full advantage of that.

The change in technology has come so fast though that chilling out in industry has made people’s skills diminish in value.

So many of the older generations were working at half speed and not learning about new technologies where the big 4 are filled with young people eager to learn new technology.

Even if those young people don’t know everything about new technologies they are more willing to learn. They are also cheaper than baby boomers and gen xers.

Technology is the way of the future at the big 4 and in industry. Embrace it and learn as much as possible about it. Learn about new technologies like blockchain, virtual reality, artificial intelligence, alteryx, and tableau.

5. Consider working for a startup or young company like the FANG companies (facebook, amazon, Netflix, or google)

Another thing that this means is that if you are considering going into industry you shouldn’t work for a more mature company with a large market cap. Right now you should consider working for a company that was created in the past couple of decades with smaller accounting and tax departments.

Consider working for a startup or a relatively young tech company like facebook, amazon, Netflix, google, spotify or another similar company. Don’t work for an old school company. If you go into an interview and the department is filled with baby boomers that have worked there for decades, then you are considering working for the wrong company.

To understand where this will happen next we have to analyze facts about AIG and GE to learn why this happened to them.

Aig pays $79.2 million to PwC. AIG has a market cap of $51 billion, but they used to be the biggest company in the world at one point.

Both of these companies are headquartered in the New York area.

Both of these companies are huge as was evidenced by their market cap numbers.