Who is PwC Partner Brian Cullinan?

Brian Cullinan was the pwc partner at oscars who tweeted backstage minutes before best picture mix-up. That was the news of the day for PwC.

Today the February 28th 2017, PwC released a statement that they are the sole responsible party for the biggest mistake in Oscars history. After remaining silent on Monday morning, they released a statement on Monday night via twitter. They stated that the mistake was made because Brian Cullinan, an Assurance Partner in the LA office, did not hand Warren Beatty the correct envelope.

The biggest controversy coming out today was that Brian Cullinan had tweeted backstage. He tweeted a picture of Emma Stone after she had won the best actress Oscar. 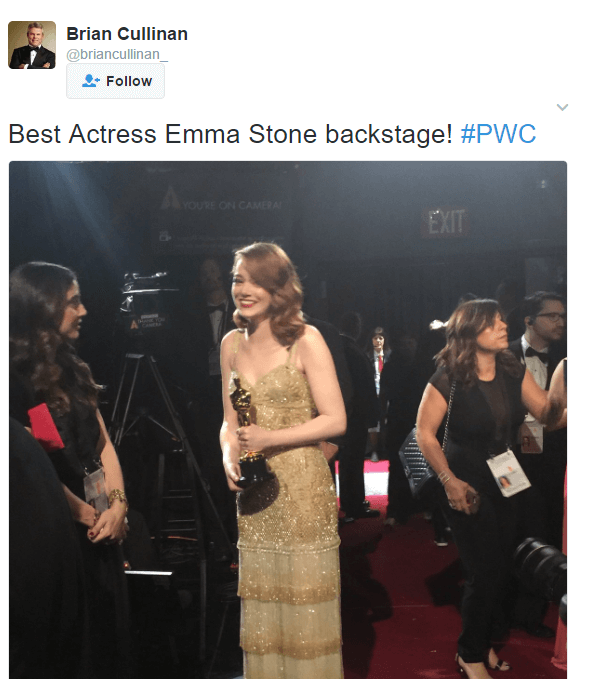 What he should have been doing was focusing on the best picture award being given by Warren Beatty and Faye Dunaway. Both actors on stage were puzzled by the envelope they had in their hands. This is the point where Brian Culinnan should have stepped in and realized there was a mistake. The PwC Partners at the Oscars memorize the winners before hand to make sure that everything goes smoothly. If he had memorized this award, he should have stepped in right away. Instead he was backstage tweeting about the Emma Stone and other actors and actresses backstage.

After the error was made, the infamous PwC Partner knew something was wrong. What he ended up doing was that he deleted his tweet. Now everybody knows with modern technology nothing is ever completely gone. Apparently Brian Cullinan did not know this. His tweet has obviously been recovered as you can see in the picture above. Now there is a big controversy over what his future will be with PwC and at the Oscars.

Cullinan has been with PwC for over 20 years. He is part of leadership at PwC and the lead partner on the Academy Awards engagement. With all the news that came out today many people found out that he likes to ride motorcycles and has children that are grown. What does this have to do with anything? Nothing really, but maybe he’ll just retire and ride his motorcycle into the sunset. That’s what I would do if I were him.

Another interesting thing that came about was that he had been interviewed many times in the past few weeks. PwC took part in a number of promotional activities with the Huffington Post. In one of these interviews he stated that it was very unlikely for an error to occur at the Oscars. He also stated that the most important part of the job was giving the presenter the right envelope (insane foreshadowing, right?).  The interviewer even asked him what would happen if they were to announce the wrong winner. He said there were measures in place to have that corrected. If the wrong winner was announced, then the measure would be corrected very swiftly.

Tim Ryan who is the head of PwC in the United States gave a statement to variety where he took full responsibility for what happened at the Oscars. He also stated that Brian is very apologetic for what happened and feels terrible.