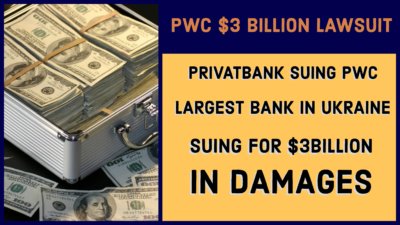 Ukraine’s largest bank has filed a lawsuit against PwC in early April 2018. This is another lawsuit that came from the Privatbank nationalization in 2016.

The bank says that they have suffered due to the extensive breaches by PwC of their responsibilities to audit the financial statements of the bank.

PwC did not detect insider lending at Privatbank

Over 95% of the loans that Privatbank issued went to former owners of the banks or affiliates, so it was really an insider lending scandal. The biggest thing is that this fraud took place over several years so it should have been spotted by a competent auditor at some point. Additionally, these loans that Privatbank was issuing to insiders didn’t have any collateral. In some cases, PwC had assessed high values to collateral related to these loans that did not appear to exist

The bank had to be privatized in order to keep it running. There was a $5.6 billion hole in the bank’s capital.

The claim is that PwC should have been able to spot this insider lending going on. It’s obviously very important to have a diverse lending portfolio to not expose a bank to one huge risk.

What does this Privatbank lawsuit mean for PwC

This lawsuit means that PwC faces another existential crisis in an overseas branch of their firm. Will this threaten PwC’s existence. No it won’t because the risk related to this will be contained to the Ukraine due to PwC’s structure. However, this might reach PwC’s branches in the European Union because there have already been talks in the EU and the Uk of breaking up the big 4 and forcing some competition so that audits can have higher quality. All this does is add fuel to the fire of regulators that want to break the big 4 up.