I didn’t want to miss an opportunity to speak about how both the Facebook Cambridge Analytics scandal and the Russian election hacking scandal might impact the big four accounting firms. 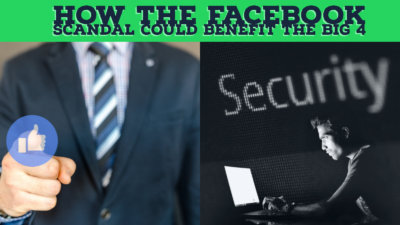 The facebook Cambridge analytica scandal is where a third party service mined tons of private data from facebook users. They used this data to try and influence the United states election. Russia tried to take similar steps in the U.S. by using facebook data to manipulate the U.S. election. Russia has also tried to hack facebook and other U.S. companies to find data that they could utilize against the United States.

This can actually benefit the big four a lot. What came out of all the testimony from Mark Zuckerberg last week was that Facebook didn’t know a lot of what was going on.

Either that or the lied about it.

Either way Facebook has to do a lot more work around their cyber security and their controls around cyber security. Many times during Mark Zuckerberg’s testimony, he admitted it would take a lot of effort to install new controls or to look into past data breaches.

But just because looking into it might take a lot of time and effort doesn’t mean that Congress and Facebook’s shareholders won’t want them to do the work.

This is a perfect scenario for the big four accounting firms to step in. Facebook might have all the technical knowledge to look into these data breaches. They might have the coders and the cyber security specialists, but they probably don’t have the time in their schedule to unravel all the misuses of user data over the past few years.

Additionally, once they complete their investigation, they might not have all the experience of how to present that information to the board. The board of facebook is not going to go easy on Mark Zuckerberg in future meetings. They are going to want to know what steps are being taken to prevent this in the future.

Both of these areas are where the big 4 shine.

There are many activist shareholders and investors of Facebook calling for him to step down as chairman and CEO of Facebook. They would like somebody more seasoned to be able to deal with scandals like this in the future. They will also want someone more seasoned in the cyber security space.

The board is going to have more ammunition than ever to try to get Mark to step down because there will likely be increased regulation across the board in the United States and Europe around social media.

Some estimates from Goldman Sachs and other financial firms say that Facebook could face 7% decrease in revenue. In order for Mark Zuckerberg to maintain absolute control of Facebook, he’s going to have to make a good presentation of his findings around privacy and cyber security controls over Facebook’s data.

This is where firms like the big4accountingfirms can really make a ton of money because not only do they have plenty of consultants that could help and be on the ground floor at Facebook for a number of weeks or months to do this work, but they also have the professionalism in order to create a presentation for the Board of Directors.

This isn’t the only cyber security issue in the news. There’s obviously the Russian election hacking scandal where the Russian government was suspected of manipulating the U.S. election.

They utilized Facebook to manipulate election along with other social media websites.

The big four can also use this hacking scandal to scare large corporations and say that their data can be accessed and manipulated by foreign governments. This is really a good opportunity for the big 4 to sell more cyber security services to the largest corporations in the world.

This is also a good opportunity for all of you out there to consider a career in cyber security at the big four. If you haven’t decided which line of service you’re going into and may be interested in working in consulting, then the cyber security space might be appealing to you. Cyber security is becoming more important every day and the big four aren’t only accounting firms anymore.

If you’re looking for a job in consulting but you’re not sure which industry you wanted to work in, obviously cyber security would be a very lucrative career as it keeps on hitting the headlines more and more every day.

Even the best tech companies in the world like Facebook don’t have great controls to prevent their information from being accessed and manipulated, so there’s obviously a lot more work to be done in this area which means that there will be plenty of jobs and plenty of money made in this sector in the future. That’s something to keep in mind as you go down your big four recruiting path and career.