GE Lays Off Tax Employees and Other Big 4 News 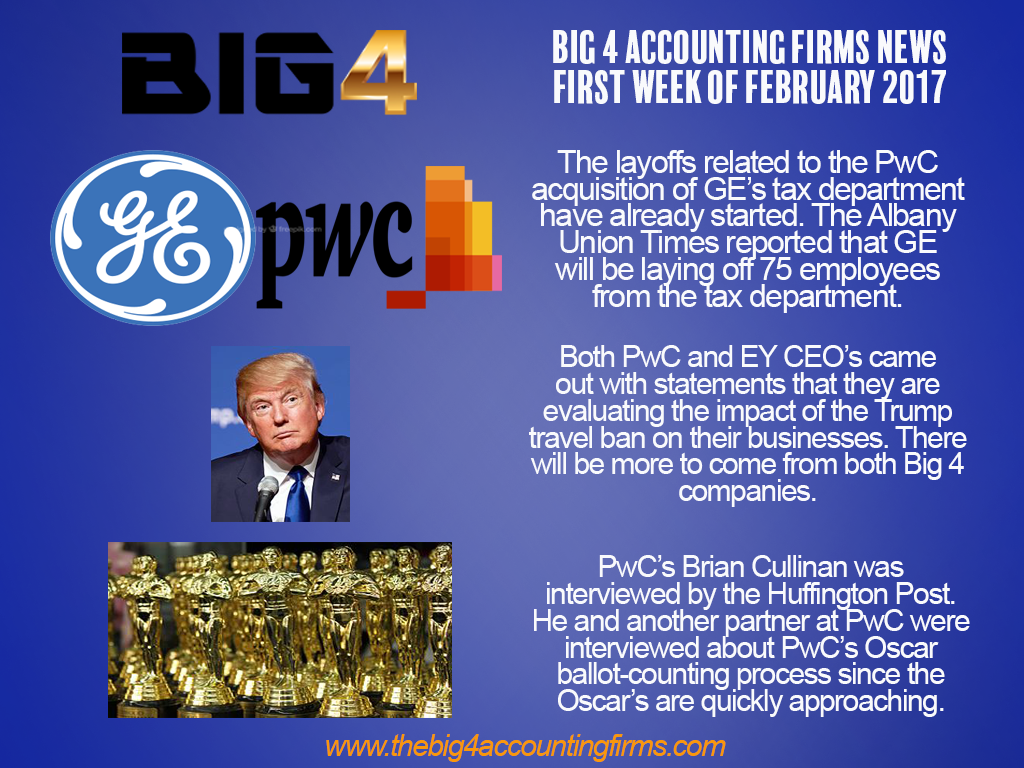 There was some interesting big 4 accounting news in this first week of February 2017.

GE lays of tax department employees after the acquisition by PwC

The first piece of news that we wanted to cover was the news out of Albany that GE is going to layoff 75 employees. The 75 employees are part of the GE tax department. This news comes after we covered the PwC acquisition of GE. In that article we predicted that people would either leave the GE tax department or there would be layoffs. Sure enough we have news that GE is laying off employees. GE confirmed that the layoffs were part of the deal with PwC.

GE made the following statement about the layoffs.

Those “layoffs” are really part of the deal with PwC, and will take place between March and May when GE’s deal with PwC takes effect.

PwC’s statement came from their US CEO, Tim Ryan. Tim Ryan made his announcement on PwC’s facebook page. He basically stated that PwC is in favor of inclusion and diversity and that PwC will have to assess the full impact of the executive order at a later time.

EY’s statement came from their US CEO, Mark Weinberger. He chose to make his statement via email. He made similar statements to Tim Ryan.

Both leaders basically stated that they will have to assess the full impact at a later time.

To read PwC and EY’s comments about Donald Trump’s travel ban make sure to check out our full post about it.

PwC had another article written about them in the Huffington Post.  The article is about one of PwC’s most important jobs, counting the votes at the Oscars.

PwC has been using Huffington Post a lot recently for various public relations campaigns, so it is no surprise that they are trying to show their value to the Oscars program a few weeks ahead of the Oscars.

Tim Ryan and other members of PwC leadership frequently post their opinions on Huffington post after they make a big press release. They recently used Huffington post to outline their new PwC 4Real diversity training.

Subscribe to our newsletter to stay up to date on Big 4 news.