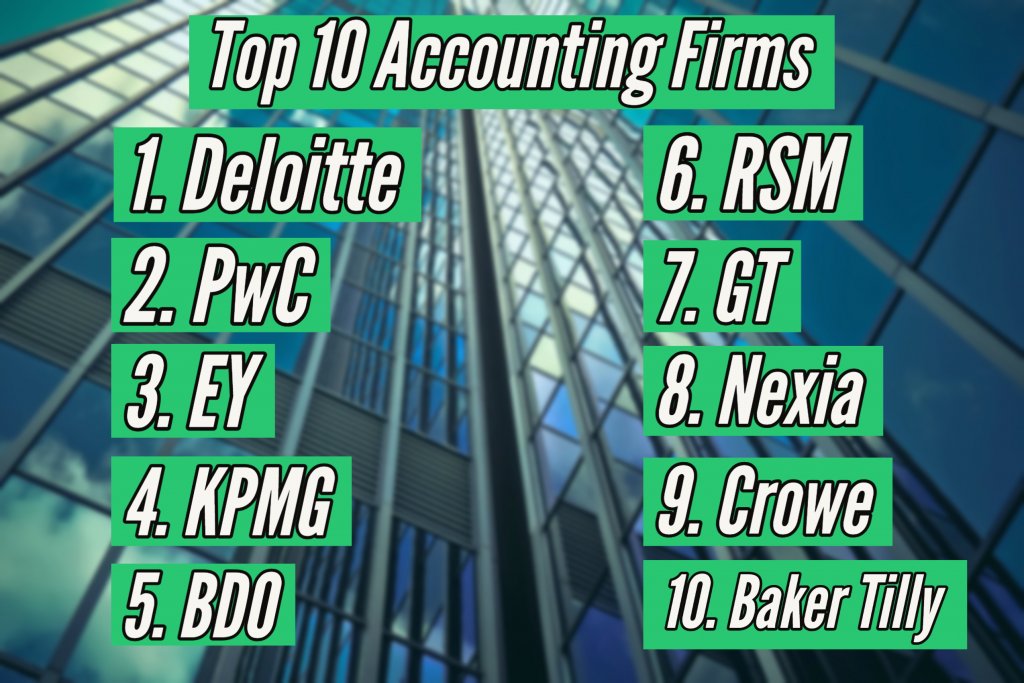 Deloitte is ranked number one with revenues of $59 billion of revenue in fiscal year 2022.

Deloitte was also ranked number one with revenues of $43.2 billion for their 2018 fiscal year.

The aforementioned PwC comes in at number 2 on the top 10 accounting firms ranking.

PwC earned 50.3 billion in revenue. This puts them behind the $59 billion of revenue that Deloitte generated.

Ernst and Young comes in at number 3. EY is usually at number 3 because they are usually several billion dollars behind PwC and Deloitte. Their audit practices and consulting practices are not as robust as Deloitte and PwC. That is why they lag behind their peers.

EY has 284,000 professionals around the globe as well.

BDO is the fifth largest accounting firm in the world.

BDO attributes their growth in 2016 to strategic mergers that occurred. In order for BDO to catch up to the big 4 accountancy firms they will have to continue merging internationally. It is the global presence that makes the big four the big 4.

BDO operates in over 150 countries in the world. The number of employees working at BDO was 67,731. BDO has 1,401 offices across the globe.

As you might remember RSM launched their global brand recently in October 2015. The global brand has helped RSM reach the number sixth spot in the top 10 biggest accounting firms.

RSM has more than 41,420 employees working across their 793 offices.

Grant Thornton is the seventh largest accounting firm with revenues of $5 billion in 2017. The number of employees at Grant Thornton grew to 47,000 in 2016.

Grant Thornton operates in over 130 countries across the world.

Grant Thornton’s revenue by region were as follows

Nexia has moved up to the 8th largest accounting firm in the world with $4.5 billion in revenue. The number of employees working at Nexia International was around 34,000.

Nexia has 2,594 partners working around the world.

Nexia earns 45% of their revenue from audit work, 26% from tax services and 29% from advisory services.

Crowe Horwath has 216 member firms and operations in 129 countries. They have over 760 offices around the world.

Baker Tilly is the ninth largest accounting firm in the world. Their most recent fiscal year has them earning $3.4 billion in revenue. Baker Tilly has 30,490 professionals around the world.

They operate in over 147 countries.