It’s finally as we predicted previously. The big 4 accounting firms are laying people off in the U.S. now. Deloitte is going to cut 5% of their workforce in the united states.

Make sure to subscribe to our podcast to get updates regarding layoffs.

Deloitte has over 100,000 staff in the U.S., so this will mean that about 5,000 people lose their jobs. They made this announcement in an all staff meeting earlier today.

Deloitte will most likely let people with the lowest utilization go first. This means that people that worked in industries that were hit the hardest will be let go first.

People that are lower on the performance scale will also likely be let go first. 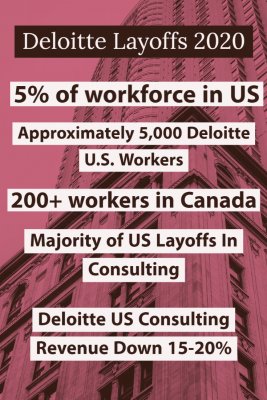 Many of the cuts will come from the consulting division as their profits have been hit the hardest. Consulting revenue is said to be down 15-20%.

Again consulting is often viewed as discretionary spending by corporations. It’s always the first to get cut.

Deloitte Canada already announced layoffs in May 2020. They laid off about 200 workers from the Toronto office.

The numbers by line of service are as follows

Deloitte has over 12,000 employees in Canada. Deloitte said that the cuts were part of business forecasting.