There was a post from a Deloitte Consultant that went viral about a month ago, and I wanted to cover it to provide insight to people about consulting jobs. It can also provide insight into the big 4 accounting job in general. 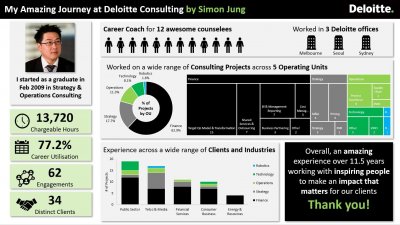 The consultant’s name is Simon Jung. He worked at Deloitte since 2009 and worked a total of 11.5 years. He left with 77.2% utilization which I will be discussing later, and he also 13,720 chargeable hours. He worked on 62 engagements and had 34 clients. He worked in 3 offices:

He also said that he had 12 counselees while he worked at Deloitte.

His linkedin resume says that he worked with PowerBi, tableau and excel. I’m guessing he used tableau to put together the graphic. It’s a good graphic. It looks like the center of the graphic is pretty redundant. It shows the types of projects that he worked on during his career at Deloitte.

He also performed a lot of work in strategy. His strategy work took up 17.7% of his time. The types of engagements he worked on in strategy included M&A, pricing, strategy and pmi. The majority of his strategy consulting was related to M&A.

Target operating model consulting can be helping clients understand and fix their finance processes. Many companies are stuck in the past and want to change their finance departments and accounting departments. This usually isn’t voluntary. They have to change after a restatement or a really big finance issue. However, this will be put on the back burner as well during lean times that we are in now. Other engagements he worked on while working on finance projects include shared services work, bi & management reporting, cost management, business partnering and lastly other.

Another thing that stood out to me was his utilization and chargeable hours. I’m not sure how Australia works but his hours worked seems low. I’m not sure how he got to 77% utilization with only 13,000 hours worked over his career. If you work in the big over 11.5 years expect to work more than this in the future. Most big 4 have over 2,000 hours that you need to work in a year. They will want you above 80% utilization for most of your career. It seems to me that this guy had it pretty easy. Maybe he spent a lot of time traveling between clients.

The counselees also makes sense to me. 12 might seem like a lot, but it isn’t really that much over an 11.5 year career. You have to remember that employees come and go, so you will have some counselees that you only have for a couple of months or less before they leave the firm.

You can use this graphic to learn each area of Deloitte’s consulting business and which one you would like to work in the most. Best practice consulting is going to be the one that is being hardest hit right now so just be aware of that. You can also use this graphic to learn about how Tableau can change your career. This obviously helped boost his profile and career. However, most people won’t consider him an all star because most consultants have to be familiar with Tableau and PowerBI. You just have to be creative with your use to stand out. I think things like this will become commonplace in the workplace. Many big 4 will probably have you put your resume or application in this format. They will want to see your background in a Tableau format. I’ve spent a previous podcast speaking about how Tableau was one of the 3 most important technologies that accountants should learn so make sure to go check that out.