President Donald Trump has suggested that there be a cut in payroll taxes until the election in 2020 to help provide stimulus to the economy. 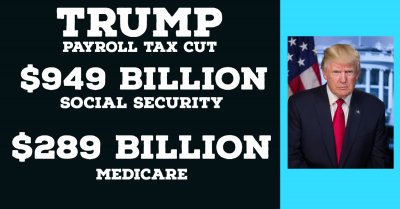 This is big news if it were to pass.

President Obama took a similar measure in 2010. Back then he provided a 2% cut in payroll taxes. According to some estimates if something similar were to take place now, that would provide $150 billion to employees. If the same thing was done for employers, then that would be $300 billion in total stimulus for the economy.

This would also mean that the government budget would have a shortage which would make some heads roll in Washington D.C. Right now it seems that Republicans are just trying to provide stimulus to the economy through cuts. Democrats are looking at ways to raise revenue for the government so that they can provide it to individual taxpayers. I’m not sure how easy it will be to get any change through without more pain unfortunately. The Democrats want to roll back some of Donald Trump’s tax cuts act of 2017. This would be a big political win for them before the election if that were to happen, but I doubt that will be successful.

The social security tax is 6.2% for the employer and the employee. This means that if you look at your paycheck you will see 6.2% coming out of your paycheck to pay this tax. This is on all wages up to $137,700.

This amounts to 12.4% payroll tax rate for employee compensation.

The Medicare tax rate for 2020 is 1.45% for the employee and the employer. This totals 2.9% for all medicare payroll taxes. There is no base wage limit for medicare taxes.

According to the federal budget for fiscal year 2020, the federal government was expecting to earn $949 billion in revenue from social security payroll taxes.

They would earn 289 billion from medicare taxes.

To compare to how much they earn from the individual income tax, that number is 1.822 trillion. The total potential impact could be almost a trillion dollars if the government were to eliminate all payroll taxes.

A regressive tax is any tax that is applied in a uniform manner. This is somewhat true for the payroll tax because there is a cap on the social security tax.

Many people believe that payroll taxes are regressive taxes because it puts low paid workers at a disadvantage. There is an upper limit to how much social security tax you pay, so the more money you make the less taxes you have to pay as a percentage of income. Additionally, employers make up for having to pay these payroll taxes by reducing wages. The higher the wages they have to pay, the more payroll tax they would have to pay. Why pay your employees more if it means you have to pay more to the government.

A Trump payroll tax cut would help out low wage earners, and it would encourage employers to keep their employees.