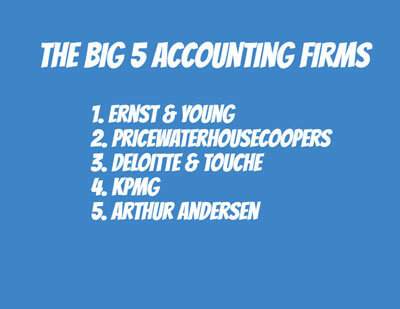 Arthur Andersen fell off the big 5 accounting firms ranking in 2002 after they were found guilty of obstructing justice in the Enron Scandal. The conviction was later overturned, but the damage was done.

It started in 1913 by Northwester University professor named Arthur Andersen.
Arthur Andersen was a global professional services firm just like the other big 5. They notoriously became to close to one of their clients, Enron, who falsely reported revenues. They infamously shredded a lot of documents related to the audit of Enron.

Arthur Andersen was also famous for the growth of their consulting business. The consulting firm eventually spun off and rebranded as Accenture.

After Enron, most of the big accounting firms spun off their consulting operations to appease regulators who said the consulting businesses interfered with independence.

Now all of the big 4 accounting firms have established and grown their consulting businesses to huge contributors to their revenue.
Their revenues before they went under approached $10 billion.

Ernst and Young was formed by a merger in 1989 between Arthur Young and Ernst and Whinney.

PwC was formed in 1998 from a merger between Pricewaterhouse and Coopers & Lybrand.

Deloitte was established in 1989 when Deloitte Haskins and Sells merged with Touche Ross to become Deloitte & Touche.

All of the other largest accounting firms in the world can largely be labeled as regional firms. They don’t have the desire to grow out of the respective market that they service. The reason for this is because they make sizable revenues from just servicing regional companies. What sets the big 4 apart is that they want to consistently service the largest companies in the world.